So far, the main standard for OSNR was the IEC 61280-2-9. It describes a method to calculate the OSNR by measuring the noise level at the mid-point between channels, as shown in Figure 1, where P is the signal power, N is the noise power, and OSNR is equal to P / N, measured in a 0.1 nm bandwidth. 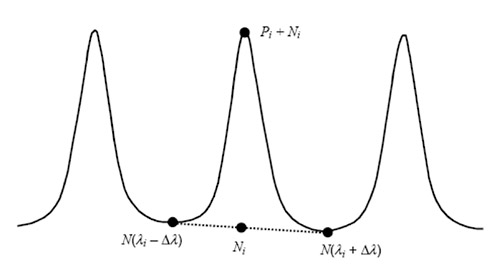 Unfortunately, this standard cannot be applied on all types of signals. As the new IEC 61282-12 standard puts it, “three recent developments in optical transmission technology have now added complications to the OSNR measurement defined in IEC 61280-2-9, two of which have already been noted in Annex B of IEC 61280-2-9:2009.” These three recent developments are: “higher spectral density of signals”, “spectral filtering in wavelength-routing elements”, and “transmission of signals with multiple carriers.”

“Higher spectral density of signals” refers to the fact that “the transmitted signals are spaced closer together in wavelength and/or are modulated at higher symbol rates, where the latter results in broader signal spectra. Faster modulation rates and closer channel spacing often cause significant overlap of adjacent signal spectra, […] so that it becomes very difficult—if not impossible—to determine the ASE level between adjacent signals from a simple spectral analysis. Transmission of densely spaced DWDM signals, therefore, greatly reduces the usefulness of the interpolation method described in IEC 61280-2-9. Hence, there is a rising need for alternative methods to measure the in-band noise power spectral density (in-band OSNR measurements).”

“Spectral filtering in wavelength-routing elements” means that ROADMs will filter spectrally the signal, making it impossible to accurately determine the noise level from interchannel power measurements. Finally, “transmission of signals with multiple carriers” refers to superchannels, which will become common starting at 200G, and even more at 400G.

EXFO’s commissioning assistant is currently the only commercial product that complies this new IEC standard. To find out more, please have a look at the following white paper: 40G/100G/200G OSNR Measurements with a Pol-Mux OSA.