Telecom system engineer with more than 20 years of experience with significant international exposure.

In 2012, Marcos joined EXFO working within the System Verification Team covering a vast range of Transport and Datacom applications from 10M to 100G as well as all EXFO T&D platforms and modules. Since December 2014 he has been a member of the EXFO Product Line Management organization for the high speed solutions and applications: OTN, SONET/SDH, Ethernet applications (RFC2544, Y.1564, EBERT, etc.).

A number of ISPs are providing ever-faster internet speeds to great fanfare. Google Fiber, for example, launched a 2 Gig plan in 2021, where subscribers get 2 Gig downlink and 1 Gig uplink speeds. Multi-gigabit tiers are in the cards for the subsidiary of Alphabet, especially since competing providers already offer even faster service.

All of this is a prelude to Google Fiber’s 100G network. You read that right. It’s referred to as 100 Gig symmetrical internet, and subscribers will get both download and upload speeds in the 100G range.

Pushing towards a 100G network means 100G testing is more vital now than ever. Evidence of that testing recently appeared in a 9to5google.com article showing what Google Fiber achieved recently in Kansas City. The article states that Google is testing its network “with employees and other trusted testers.”

While the article doesn’t mention these “trusted testers” by name, it gives one of them away with the sole image in the article, a screen shot from its testing apparatus. Engineers measured throughput (a download in this case) at 20.2000 Gbit/s using the EXFO FTBx-88260 NetBlazer solution. Upload speeds were not mentioned. 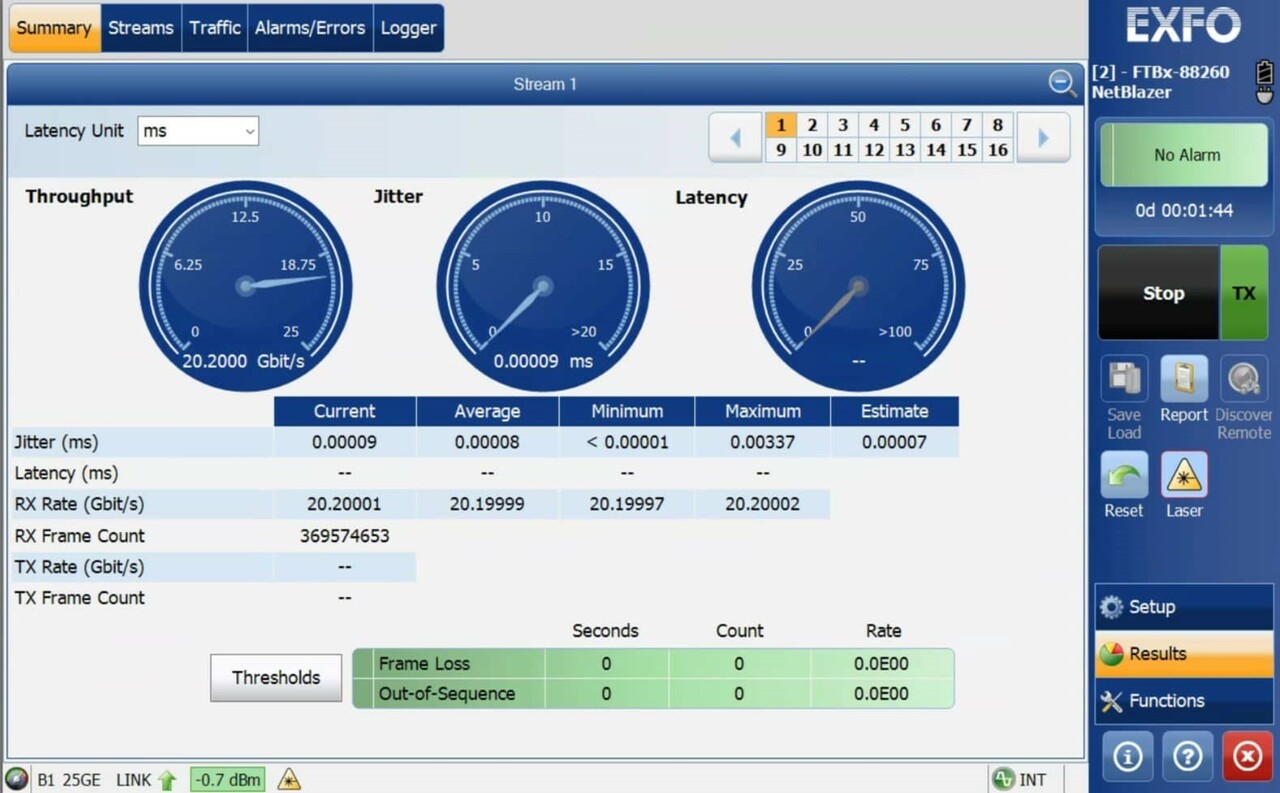 “Our customers are testing 100G links from the customer premises all the way to a centralized location,” said EXFO’s product line manager Marcos Vasconcellos. “To accomplish this, they use EXFO’s NetBlazer 100G solution with the LTB2 rackmount at one end and with the portable FTB-1 V2 Pro platform at the customer premises.”

Google Fiber kicked off in Kansas City, using the NetBlazer 100G test solution as a proof of concept. With speeds like this at accessible prices, Google Fiber ought to be an easy sell as it rolls out in other places across the U.S.A. And wherever Google Fiber goes, EXFO testing equipment won’t be far behind.