Part 1 of this article highlighted the increasing need for wireless service providers to turn to long-term evolution (LTE) in order to deploy mobile broadband networks beyond 3G, and examined how this transition to 4G manifests developing trends of mobile radio networks.

To reach the requirements, especially in the access network, the use of orthogonal frequency division multiplexing (OFDM), higher-order modulation schemes, advanced antenna technologies and a different signaling approach are needed.

OFDMA for Uplink and SC-FDMA for the Downlink

OFDMA works with hundreds to thousands of small bandwidth sub-carriers inside the OFDM carrier and is able to allocate these sub-carriers to different user equipment (UE).
The two key advantages of OFDMA technology are:

Actually, OFDMA is only used for the downlink of LTE. The reason is that the amplitude modulation of the OFDM time signal (significant if single carriers are superimposing) would lead to a significantly more expensive power amplifier in the UE’s transmitter. In the uplink, the UE emulates a single carrier on the sub-carrier’s spectrum, while keeping most of the OFDM structure; this is called "single carrier frequency division multiple access (SC-FDMA)".

The figure below illustrates all the modulation schemes used by LTE for a signal-to-noise ratio of about 18 dB: 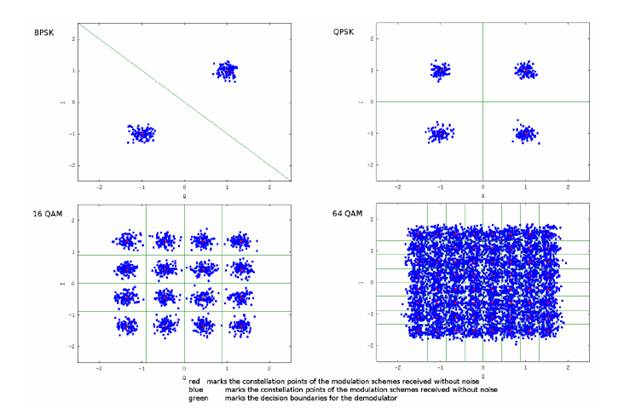 MIMO offers to double or quadruple the peak data rate, which can be obtained with a given modulation scheme without MIMO; a favorable mobile radio-channel propagation and multiple antennas are needed to achieve this.

The idea behind MIMO is to use a given radio channel several times at the transmitter side and at the receiver side. Because of unique multipath propagation between the different antenna pairs, the receiver is able to separate the signals from the different transmit antennas. As a rough calculation we can assume the following:

In UMTS (3G) for any new communication with the core network starting from the idle UE, there is a two-step approach:

These two steps carried out one after the other, make for quite a long procedure for location of area updates, call establishments, packet data protocol (PDP) context establishments, etc., leading to a control plane latency which would be unacceptable for LTE.

The following figure illustrates the procedure taken in LTE for any communication starting from an idle UE: 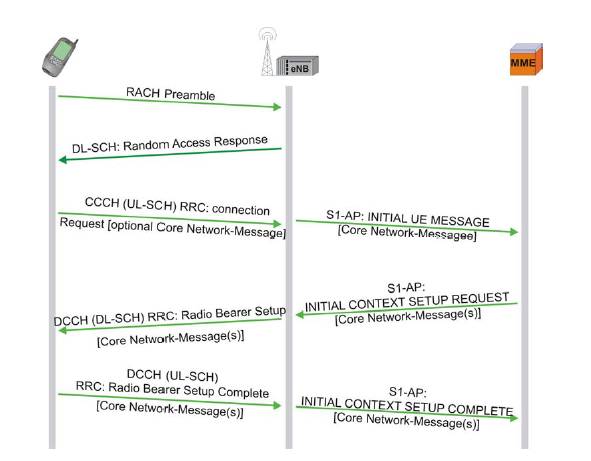 Within LTE, different classes for the UE have been defined. This definition relates to the number of MIMO streams, the number of resource blocks and the peak data rates in uplink and downlink.

UE class 1 is LTE's basic UE class. Here, the data rates are comparable with typical HSPA UE’s. In contrast to the UE classes 2-4, the transmission without forward error protection (code rate 1) is not allowed for UE class 1. UE class 1 is limited to 5 MHz, and this class is not capable to perform MIMO. UE classes 2 to 4 are able to process two MIMO streams. UE class 5 is defined to have up to four MIMO streams, which also uses 64-QAM in the UL.

LTE is well prepared to play a key role in 4G. This is true for existing 3GPP operators and new competitors. Cornerstones that make it so appealing to the market are high throughput (uplink and downlink), low latency, high spectrum efficiency and a competitive cost position.

With the introduction of the eNB and the self-organizing network approach, the LTE network is considered to be easy to maintain and operate. It is also designed to be very flexible, with respect to frequency range, bandwidth use and duplex modes. The all-IP network architecture and a connected IMS (or similar) also provides a flexibility in service and business case. The capability of the LTE-SAE to interoperate with existing mobile networks gives the operators an easy migration path towards LTE. LTE can also be seen as a low-cost solution for high data rates.