As the demand for higher bit rates continues to increase, more and more wireless service providers are deploying mobile broadband networks. And to ensure that customers have the same advanced quality of experience (QoE) with wireless services as they do with fixed-wireline services, providers are turning to long-term evolution (LTE) to bring their networks beyond 3G.

With the transition from 3G to 4G, the following trends of mobile radio development are manifesting:

With 3GPP Release 5, and as more operators now use digital subscriber lines (DSL) for Iu interfaces, AIPN has become a reality. However, the structure of the core, radio network controller (RNC) and node B is more tailored to the legacy-circuit switched (CS) architecture known from the global system for mobile communication (GSM). For 4G networks, it is more advantageous to use an architecture tailored for AIPN from the start; this will lead to a competitive cost position. In any case, 4G networks have to be much more cost effective with regards to costs per throughput than 3G networks. This is largely due to the fact that data rates of 4G are dramatically increasing—whereas the end customer just expects to pay for an inexpensive flat rate.

In the past, there was a clear development from universal mobile telecommunication system (UMTS) to high-speed packet access (HSPA) and to enhanced high-speed packet access (HSPA+), leading away from CS services to PS services. With future HSPA+ networks, operators will aim for operation without CS and voice being a PS application. However, 4G systems do not even foresee the possibility of having CS services; in this case, the latency provided is comparable to home DSL service.

Applications like gaming, push to talk over cellular (PoC), etc., require even lower latencies than those provided by CS voice services; this applies for both the user plane and also to the control plane (setup). These latencies can only be reached by modifying the architecture of the infrastructure and a new approach for the protocol stack.

The fixed mobile convergence and the introduction of advanced services like multimedia broadcast and multicast services (MBMS) are calling for very high data-rates. These high data-rates enable future 4G systems to enter new markets currently covered by DSL and cable TV providers. However, the limitation of frequency spectrum and the need for high data-rates is putting the mobile radio industry in a dilemma. The required data rates can only be achieved once the following key technologies have been combined:

a) High bandwidth efficiently managed by orthogonal frequency-division multiple access (OFDMA)
b) Higher-order modulation schemes like 16-quadrature amplitude modulation (QAM) and 64-QAM
c) Multiple in/multiple out (MIMO) for enlarging the maximum throughput by two or four times, contrasted to an operation without MIMO

Long-term evolution (LTE) is the answer that 3GPP needs to be prepared to face this developing trend. LTE or evolved universal mobile telecommunications system (UMTS) terrestrial radio access (E-UTRA) describe the evolution of the radio-access network and complements the system architecture evolution (SAE), which focuses more on a new evolved packet core (EPC). The figure below illustrates the new network architecture with LTE/SAE: 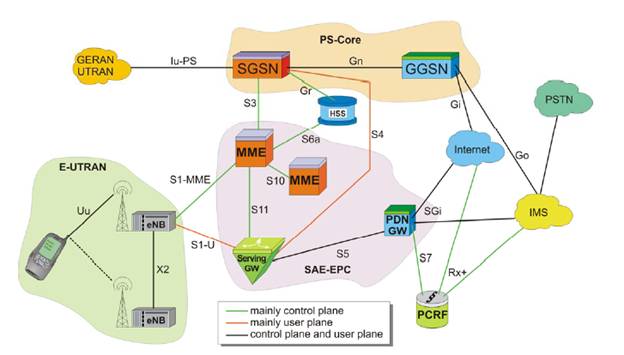 Most striking about the new architecture is that there is no RNC in the LTE network. Instead, enhanced node B’s (eNBs) are directly connected to the evolved packet core (EPC). The eNBs form a self-organizing network through their interconnection with the X2 interface; this change in architecture is necessary in order to reach the low latency requirements. Also, there will be no soft handover—the benefits that were created by the soft handover now aim at the self-organizing network.

The 4G arena is subject to quite strong competition. The standards with the biggest market potential are ultra-mobile broadband (UMB) (3GPP 2), IEEE 802.16e (WiMAX) and of course, LTE (3GPP). Table 1 lists the general 4G requirements applicable to 4G standards; here, the focus is on the radio-access issues.

The 3GPP standardization body has decided to meet the 4G challenge with the following requirements for LTE:

In the table above, at least two transmit antennas and two receive antennas are assumed in order to derive the data rate requirements. Since LTE reuses the UMTS spectrum, not every operator might be able to use 20 MHz spectrum for LTE. Thus, LTE has to operate with a variable bandwidth both for the UE and the eNB. For the spectrum efficiency (average utilization of the given operating band in the running network), two to six times the value of 3GPP Release 6 is required. Also remember that the peak data rate cannot be maintained for maximum mobility and maximum coverage (for any standard). Coverage depends on the deployment environment and frequency band, as well as the data rate and mobility.

Be sure to read  Part 2 of this article as it examines the key technologies and approaches required to reach requirements.