Maury Wood has spent most of his career in communications technologies and businesses, progressing from V.90 dial-up, xDSL broadband, 4G/5G, to optical networking. He focuses his efforts on North American key accounts for EXFO. Outside of work, Maury enjoys climbing and playing the bass.

In a previous blog post, we looked at asymmetric power splitting (connectorized unbalanced splitters or tapered splitters) as one of the PON technologies that service providers use to deliver cost-effective fiber-to-the-home broadband access to underserved rural areas. In this post, we’ll look at a similar point-to-multipoint technology used to achieve the same goal: spliced optical distributed taps.

One key to the cost savings associated with distributed taps, as claimed by their suppliers, relates to the reduced amount of fiber cabling (distribution and drop cables) required as compared with centralized symmetric power splitter network configurations. Passive distributed taps, as shown below, implement a linear or serial daisy-chain architecture that will be familiar to engineers and technicians with experience in hybrid fiber cable (HFC) topologies. While coaxial cable taps work in the electrical domain, and the distributed taps under discussion here work in the optical domain, the basic signal tapping theory of operation is similar. This functional similarity translates into lower training costs for network operators whose technicians are familiar with electrical coaxial components and technology. 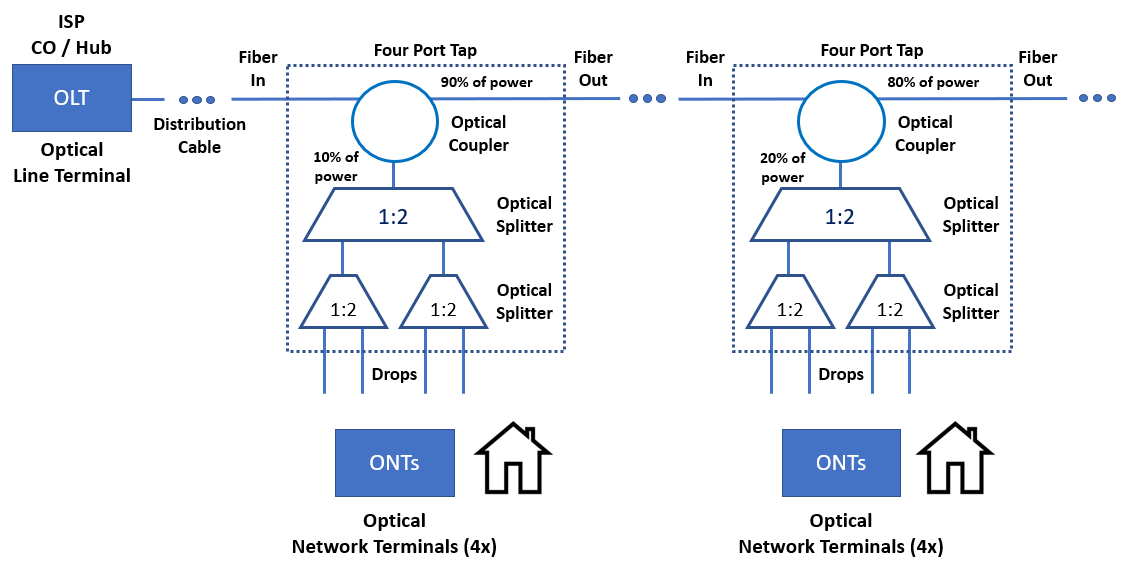 Another advantage of distributed taps is reduced splicing overhead, with only one fiber cut and two splices required to add each tap. The small physical size of tap terminals allows them to be mounted aerially, avoiding the need for equipment cabinets, mounting pads, labor costs and the associated local government approvals for this infrastructure.

Distributed taps have two important optical performance parameters that impact end-to-end optical loss budgeting. The first is the tap value or drop loss, and specifies the optical power extracted by the tap, between the input distribution fiber and the output drop fibers (the remaining optical power passes to the next tap in the PON). All the drop ports in each tap along the link (four in the example above) have the same drop loss. Taps closer to the optical line terminal (OLT) extract less optical power from the trunk than taps further from the OLT, in order to allow these PONs to have maximum reach; this is particularly important in dispersed rural areas. The second performance characteristic is tap insertion loss, the amount of light power (both typical and maximum) diverted from the input distribution fiber to the output distribution fiber. The final tap in the PON is the terminating tap, and it has no output fiber port, as all the light energy passes to the drop ports.

Here is a simplified illustration of the downstream path using typical loss values to help make these parameters clearer. Note that the attenuation of all connectors (below 0.75 dB for SC APC per IEC standards), fusion splices (below 0.3 dB per IEC standards), and the fiber itself (about 0.2 dB per km at 1490 nm) must be included in an actual engineering optical loss budget accounting.

A key takeaway here is the available range of tap values (drop losses) from their suppliers allows the network engineer to manage the optical link budget so that ONTs near and far from the OLT receive adequate transmit light signal power. This design methodology also manages the 1310 nm upstream signal power from the ONTs back to the OLT.