Timing accuracy is not a trivial problem, since computer real-time clocks are inaccurate—as they might drift several seconds in a day. This is definitely not enough, since (at least) millisecond-order accuracy is usually needed in network-delay measurement.

Network time protocol (NTP) is a cost effective way to reach synchronization. Maximum accuracy for time synchronization using NTP is about one millisecond. To reach maximum accuracy, the NTP server must remain in the same local area network (LAN) as the NTP client in order to minimize delay and jitter between the server and the client. NTP is quite slow to obtain accurate synchronization; stabilization time of about an hour is sometimes needed.

Network address translation (NAT) is the process of modifying network address information in datagram packet headers while in transit across a traffic routing device for the purpose of remapping a given address space into another.

NAT has effects on measurements in IP networks because it intends to masquerade source IP addresses, it makes two-point measurements—relying on finding hard-to-find IP addresses or events that are impossible to perform.

Today, NAT is most often used in conjunction with network masquerading (or IP masquerading), which is a technique that hides an entire address space, usually consisting of private network addresses (RFC 1918) behind a single IP address in another, often public, address space.

This mechanism is implemented in a routing device that uses stateful translation tables to map the ‘hidden’ addresses into a single address and then rewrites the outgoing Internet protocol (IP) packets on exit, so that they appear to originate from the router. In the reverse communications path, responses are mapped back to the originating IP address using the rules (i.e., the state) stored in the translation tables. The translation table rules established in this fashion are flushed after a short period without new traffic refreshing their state.

As described, the method only allows transit traffic through the router when it is originating in the masqueraded network, since this establishes the translation tables. However, most NAT devices today allow the network administrator to configure translation table entries for permanent use. This feature is often referred to as "static NAT" or "port forwarding" and allows traffic originating in the "outside" network to reach designated hosts in the masqueraded network.

The most essential and general-performance, quality-of-service (QoS) metrics are:

Another somewhat different, yet important, metric is data-transmission efficiency, i.e., how much control information is needed in order to get the actual data through; however, this metric is not usually taken into consideration—even though in power-limited wireless devices, it is quite essential for power-consumption minimization.

Packet loss is more or less an independent metric in comparison to the other metrics—even though some approximation of it can be drawn from raw throughput if the offered traffic load is known. Lost packets are usually detected via sequence numbers and automate repeat request (ARQ)-methods. Packet loss has its effect to the other metrics. For example, consider an application layer jitter measurement, where jitter is measured directly from sequentially arriving packets. If lower layers fail to deliver some packets correctly, jitter is increased because of the gaps of missing packets. It might also be the case that the application layer packets are all delivered correctly, but jitter is still increased because of the erroneous lower-layer packets and re-transmissions provided by ARQ-methods; in this case, delay is also increased.

One-way delay (OWD) is the elapsed time for traversal of a packet between measurement points. For example, OWD can be used to locate network bottlenecks, i.e., to locate which part of the network causes the most of the overall delay. OWD measurement is useful to ensure that the network operates in congestion situations—when QoS methods like differentiated services (DiffServ) are used in the network to ensure good QoS for critical applications.

Jitter is of the following types:

Each IP telephony call requires a minimum quantity of bandwidth. If the network throughput does not meet the minimum requirements, the call cannot be established and any ongoing calls will be discontinued. IP services are commonly sold with defined bandwidth that reflects the services’ access-link capacity. However, defined bandwidth is not always the same as achieved throughput. Throughput characterizes the available user bandwidth between the defined network’s ingress and egress points. The requirement for this service level agreement (SLA) parameter is obvious for point-to-point services such as virtual wires, as defined by the Pseudo Wire Emulation Edge to Edge working group within the IETF. For multipoint-to-multipoint services, such as IP virtual private networks, the SLA definition must exclude cases in which throughput loss is due to customer-based aggregation.

Loss characterizes the packet drops that occur between defined network ingress and egress points. Network congestion results in the loss of voice and data packets across the network, disrupting speech and creating signaling problems. For VoIP codecs commonly support concealment algorithms, which can hide the effects of losing 30 ms of voice samples. The loss of two or more consecutive 20 ms voice samples thus results in a noticeable degradation of voice quality.

The passive method works as follows: QoS agents are connected non-intrusively (parallel) to the network path under test. By passing measurement points, packets are captured and analyzed by QoS agents. Capture and analysis results, such as network flows, packet IDs and packet time-stamps, are transmitted to other measurement points/QoS agents via a separate measurement connection. To calculate delay, flows are matched using IP addresses, protocols and ports. Packets are matched using packet IDs; delay is calculated from the packet time-stamps.

The measurement connection is established between the measuring devices, so measurement can be performed also in a NAT environment.

Single-point measurements provide end-to-end performance information, which can be used to determine QoS. This setup enables the possibility to measure round-trip time (RTT), i.e., the time from the initiation of the service request to the reception of the service reply. This information is a valuable QoS metric and gives direct insight into the total performance of the system. From RTT (tRTT), it is easy to calculate the average throughput of the system if the amount of transferred data (Nd) is known:

In this way, delay and throughput are related, but the relation is not necessarily strict. Consider, e.g., a single-point passive measurement, where passing traffic is measured at some point of a network. In this, throughput can be easily measured, but one-way delay cannot.

What's more, network flow accounting can be used to monitor QoS from a single network point. NetFlow is a technology developed for flow accounting; in NetFlow-based accounting, the network flows are captured and collected from a single network point and the collected data is further stored to flow database for post processing. NetFlow technology efficiently provides the metering base for a key set of applications including network traffic accounting, usage-based network billing, network planning, as well as dial-services and network monitoring, as well as outbound marketing and data-mining capabilities. 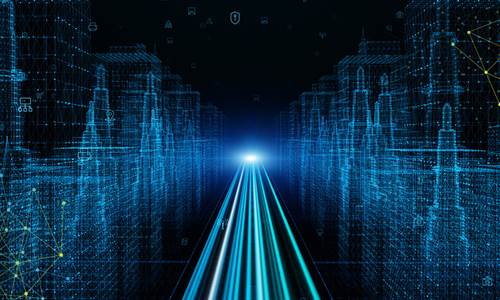