On September 8, 2017, EXFO acquired a 33.1% stake in Astellia, a global leader in the performance analysis of mobile networks and subscriber experience. EXFO intends to purchase publicly traded Astellia’s remaining equity through a public tender offer. On October 2, 2017, EXFO closed the acquisition of Yenista Optics, a supplier of high-end optical test equipment for the laboratory and manufacturing markets.

“I am very pleased with EXFO’s financial results in the fourth quarter of 2017, highlighted by revenue at the top of our guidance range, even stronger bookings and our best adjusted EBITDA margin in recent memory,” said EXFO’s CEO Philippe Morin. “Overall in fiscal 2017, we delivered 5% revenue growth and healthy profitability amid a competitive environment. Equally important, we established a solid foundation for future growth with investments—both internally and through acquisitions—in key technology areas like fiber, the Cloud, network virtualization and 5G.  These growth initiatives, combined with heightened sales efficiency and recent restructuring measures, should enhance profitability in 2018.”

Selected Financial Information (unaudited)
(In thousands of US dollars) 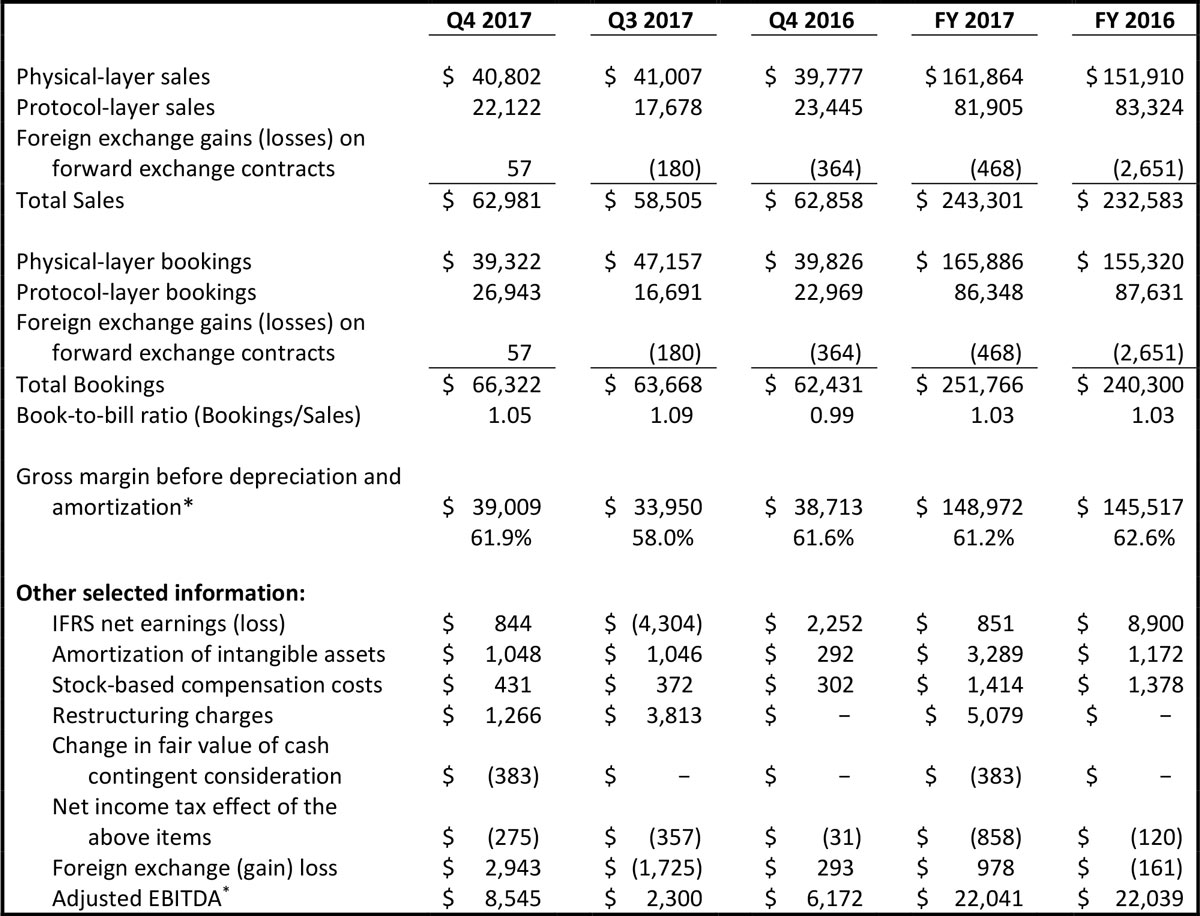 EXFO forecasts sales between US$60 million and US$65 million for the first quarter of fiscal 2018, while IFRS net results are expected to range between a net loss of US$0.01 per share and net earnings of US$0.03 per share.

IFRS net results include US$0.02 per share in after-tax amortization of intangible assets and stock-based compensation costs.

This guidance was established by management based on existing backlog as of the date of this news release, seasonality, expected bookings for the remaining of the quarter, as well as exchange rates as of the day of this release.

EXFO develops smarter network test, monitoring and analytics solutions for the world’s leading communications service providers, network equipment manufacturers and webscale companies. Since 1985, we’ve worked side by side with our customers in the lab, field, data center, boardroom and beyond to pioneer essential technology and methods for each phase of the network lifecycle. Our portfolio of test orchestration and real-time 3D analytics solutions turn complex into simple and deliver business-critical insights from the network, service and subscriber dimensions. Most importantly, we help our customers flourish in a rapidly transforming industry where “good enough” testing, monitoring and analytics just aren’t good enough anymore—they never were for us, anyway. For more information, visit EXFO.com and follow us on the EXFO Blog.

This press release contains forward-looking statements within the meaning of the U.S. Private Securities Litigation Reform Act of 1995, and we intend that such forward-looking statements be subject to the safe harbors created thereby. Forward-looking statements are statements other than historical information or statements of current condition. Words such as may, expect, believe, plan, anticipate, intend, could, estimate, continue, or similar expressions or the negative of such expressions are intended to identify forward-looking statements. In addition, any statement that refers to expectations, projections or other characterizations of future events and circumstances are considered forward-looking statements. They are not guarantees of future performance and involve risks and uncertainties. Actual results may differ materially from those in forward-looking statements due to various factors including, but not limited to, macroeconomic uncertainty as well as capital spending and network deployment levels in the telecommunications industry (including our ability to quickly adapt cost structures with anticipated levels of business and our ability to manage inventory levels with market demand); future economic, competitive, financial and market conditions; consolidation in the global telecommunications test and service assurance industry and increased competition among vendors; our ability to successfully integrate businesses that we acquire; capacity to adapt our future product offering to future technological changes; limited visibility with regards to timing and nature of customer orders; longer sales cycles for complex systems involving customers’ acceptances delaying revenue recognition; fluctuating exchange rates; concentration of sales; timely release and market acceptance of our new products and other upcoming products; our ability to successfully expand international operations; and the retention of key technical and management personnel. Assumptions relating to the foregoing involve judgments and risks, all of which are difficult or impossible to predict and many of which are beyond our control. Other risk factors that may affect our future performance and operations are detailed in our Annual Report, on Form 20-F, and our other filings with the U.S. Securities and Exchange Commission and the Canadian securities commissions. We believe that the expectations reflected in the forward-looking statements are reasonable based on information currently available to us, but we cannot assure that the expectations will prove to have been correct. Accordingly, you should not place undue reliance on these forward-looking statements. These statements speak only as of the date of this document. Unless required by law or applicable regulations, we undertake no obligation to revise or update any of them to reflect events or circumstances that occur after the date of this document.

EXFO provides non-IFRS measures (gross margin before depreciation and amortization and adjusted EBITDA) as supplemental information regarding its operational performance. The company uses these measures for the purpose of evaluating historical and prospective financial performance, as well as its performance relative to competitors. These measures also help the company to plan and forecast future periods as well as to make operational and strategic decisions. EXFO believes that providing this information, in addition to IFRS measures, allows investors to see the company’s results through the eyes of management, and to better understand its historical and future financial performance.

The following table summarizes the reconciliation of adjusted EBITDA to IFRS net earnings (loss) in thousands of US dollars:

EXFO announces today that the Corporation has filed an amendment to its previously filed Rule 13e-3 transaction statement on Schedule 13E-3.